Organics 101: A Stakeholder’s Guide to Organic Waste Material and Potential Strategies for Processing

By Dane Campbell and Evan Williams

Organics, what to do?

The subject of recycling, processing and handling organic waste has been a leading-edge subject inside the waste industry for many years. Roughly 35 percent of the weight being hauled and dumped in landfills is an organic fraction. There is a focus to reduce the amount of organic waste from landfills, mostly due to methane pollution. Many companies in the U.S. want to help this situation and have many different ideas, but without much experience, it can be difficult to select the right solutions. There is not one solution to fit all situations, and solutions can be radically different depending on the material and the location. The common challenge with all solutions is figuring out how to plan and operate a financially viable business around the organic waste. In most cases, the business cannot remain viable without being profitable with only hauling and tip fees. 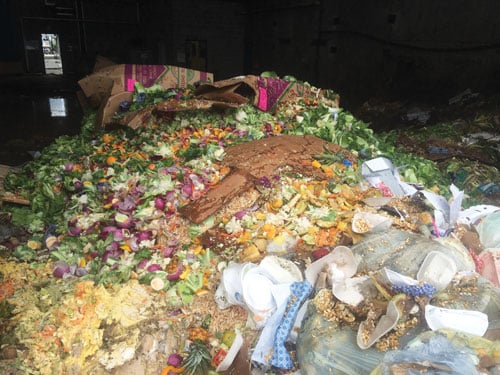 Organic waste material can come in many different forms, and it is essential to understand all types ahead of time. Even more important, build your business solution on a specific type of organic material coming in, and what value it has afterward.

Types of Organic Waste Material Streams
The waste industry has used many loose terms, with little technical definitions for organic waste, when compared to the scrap industry’s IRSI material classifications or the plastics industry’s chemically defined polymers. There is often confusion between haulers, processors and end-users dealing with organic waste. It is even more challenging to understand for new companies or existing ones trying something new. A common phrase in the waste industry is, “you can only work with what the material will give you.” In the case of waste organics, the inbound material is split into one of the three categories: Source Separated Organics, Green Waste and Municipal Solid Waste.

Source Separated Organics
Source Separated Organics (SSO) is a term loosely used from clean fruit and vegetable discards, to landscaping debris with food scraps. Both can be very different when it comes to processing and end markets. SSO has received the lion share of the public’s attention and fanfare over the past eight years. However, it is the lowest volume, as a percentage, of all waste organics being collected and handled. Then why is there so much attention? There are a few reasons:

The most common contamination found in SSO is hard plastics, soft plastics and inert items such as glass. However, rarely are all three at the same level from each specific source. Soft plastic, or film, is the most common issue often coming from grocery packaging and waste collection bags. It weighs the least, but looks the worst. Hard plastic contamination most often comes from schools, fast food, and cafeterias in the form of plasticware or single-serve containers. Glass contamination most often comes from homes, bars and restaurants, where tableware and single-serve bottled beverages are conventional. Knowing where the material comes from, or even better, planning your inbound collection routes, can be the first step in getting ahead.

This website uses cookies to improve your experience while you navigate through the website. Out of these, the cookies that are categorized as necessary are stored on your browser as they are essential for the working of basic functionalities of the website. We also use third-party cookies that help us analyze and understand how you use this website. These cookies will be stored in your browser only with your consent. You also have the option to opt-out of these cookies. But opting out of some of these cookies may affect your browsing experience.
Necessary Always Enabled
Necessary cookies are absolutely essential for the website to function properly. These cookies ensure basic functionalities and security features of the website, anonymously.
Functional
Functional cookies help to perform certain functionalities like sharing the content of the website on social media platforms, collect feedbacks, and other third-party features.
Performance
Performance cookies are used to understand and analyze the key performance indexes of the website which helps in delivering a better user experience for the visitors.
Analytics
Analytical cookies are used to understand how visitors interact with the website. These cookies help provide information on metrics the number of visitors, bounce rate, traffic source, etc.
Advertisement
Advertisement cookies are used to provide visitors with relevant ads and marketing campaigns. These cookies track visitors across websites and collect information to provide customized ads.
Others
Other uncategorized cookies are those that are being analyzed and have not been classified into a category as yet.
SAVE & ACCEPT
error: Content is protected !!